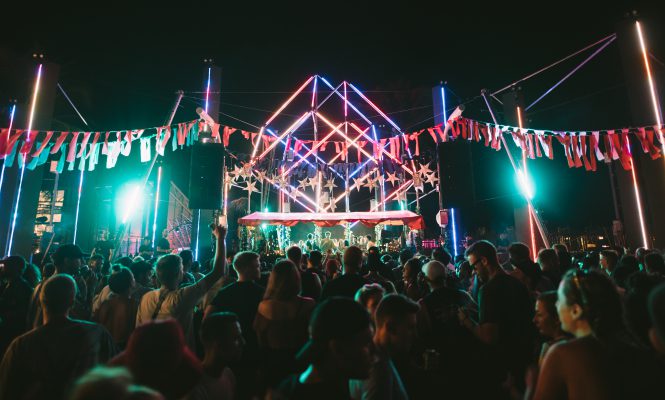 It was 5.47 pm in Vietnam when the last sun of the year started to fade away. Lighting the clouds to a beautiful shade of scarlet, the blazing sun touched the horizon. Whilst gazing at the sun sliding into the sea, people at the beach recalled and celebrated all the great memories of the year. Gentle techno music accompanied us from behind, and some people started grooving to the music. When the sun had finally disappeared into the sea, everyone clapped, making their wishes for the New Year.

Located in Vietnam, Phu Quoc is a majestic island that offers a truly unique experience of its tropical atmosphere. Like Jeju island in Korea or Okinawa in Japan, the island is also a popular tourist destination for the locals. At 48 km in length, the long island boasts beautiful sceneries surrounded by crystal clear water and its 99 mountains. The pristine, untouched nature of the place means that there aren’t enough flights to the island or transportation to venture out, but the unmatched beauty of the scenic island makes it all worthwhile.

The pristine island of Phu Quoc is also host to an annual festival that captures the allure of the scenic destination. First held in 2016, the Epizode festival marked its fourth edition this year. Spanning over 11 days from December 27, 2019 to January 7, 2020, the festival’s lineup featured the likes of Jamie Jones, Carl Craig, Loco Dice, Lehar, Agents of Time, Fideles, Agoria, Butch, Giorgia Angiuli, Eats Everything, Patrick Topping, Birds of Mind, and more. DJ Mag Asia went to the white sandy beaches of Phu Quoc to witness the festival that turned the island into a techno haven. 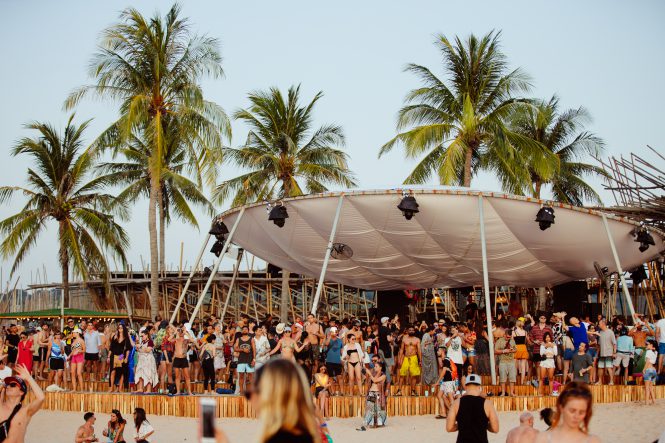 A Venue Full of Charm

Epizode was set in the long beach of Sunset Sonata Beach Resort, located west of the island. The venue was far from the residential area, so we traveled by cab. The fare was quite cheap, but the reckless taxi driver kept us on the edge of our seats, more than any other moment in Epizode as he constantly crossed the centerline. After picking up our bands at the ticket booths made from renovated container boxes, we passed through the gates of Epizode. As we set foot in the festival grounds, soft sands got into my sandals and tickled my feet, and the sparkling ocean stretched out like infinity before us.

It wouldn’t have been easy to transform the wide, empty beach into a unique space. The festival produced a sense of unity through its neat white theme as with its stages which were constructed with long bamboos. There were also large sculptures that breathed life into the event, the best of which was ‘The Elephants’—Epizode’s iconic sculpture of Salvador Dali’s painting. The sculpture of four elephants with their long, brittle legs stood in the waves, which looked like they were returning to the beach after a good swim.

The Epizode festival consisted of four stages: Main Stage, Frisbee Stage, EGGS Stage, and Shell Stage. Adorned with colorful LED lightings, the main stage boasted the biggest size out the four stages and it was also the place where the countdown to the New Year took place on December 31. Looking like a UFO ready to soar into the sky at any moment, the Frisbee Stage appeared to be true to its name as it was literally shaped like a frisbee. Naturally, it was also the very place where the British techno DJ Ben UFO performed on stage. There were 6 egg-shaped sculptures installed on the EGGS Stage, which featured heavy-hitting beats that kept the dance floor busy. The Shell Stage provided a cozy indoor-ish atmosphere in its shell shaped stage and featured rich sound systems. There was also a massive bamboo structure located between Main Stage and Frisbee Stage that served as a rendezvous spot, but at the same time it became a quite dangerous place for people to get lost while intoxicated.

As the day grew dark, the gleaming sculptures provided another wonderful eye-candy. The stellar productions had effectively divided and embellished the spaces, which looked like the work of a seasoned pro. While some say that the productions were blindly focused on its aesthetics, to me it seemed like the spatial design brought a unique sense of coziness via its small, hidden spaces scattered around the venue. 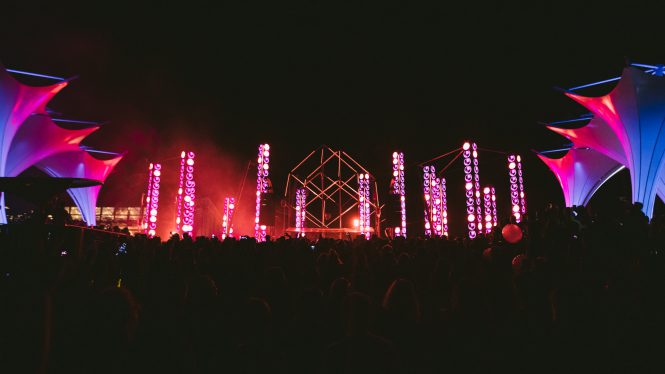 Celebrating the New Year with Music

In a way, Epizode is not the most guest-friendly festival. With timetables that are announced on the day, closed-door events for insiders, and the beaches that require long walks, one can’t help but wonder how Epizode still manages to enchant the visitors. To me the answer is simple: music. The hazy soundscapes of techno coupled up with the calm, peaceful vibe of the event could be the reason why Epizode holds a special place in my heart.

The day of Epizode starts from 4 in the afternoon. Considering that the party goes on for 24 hours non-stop, it’s kind of pointless to divide the party into separate days, but that’s what they usually consider as the start time of the day. DJ Bruno Curtis hailing from Prague came up on Frisbee Stage, and accompanied by Bruno’s groovy, melodic soundscapes, the last sun of the year faded away at 5.47 pm. As the sun fell and the lights illuminated the stage, DJ Kolford—house/techno DJ from Moscow—took the main stage. The sound systems and lightings of the main stage highlighted the artists’ trippy soundscapes.

Epizode’s last set of 2019 was graced by youANDme, the Berlin-based techno DJ who is also a popular figure in Ibiza. The world-class DJ’s set was more than enough to wrap up the year. As it got closer to midnight, the Main Stage was swarming with people who came for the countdown.

The New Year kicked off with Italian DJ/Producer Lehar’s sublime melodic techno set. Everyone at the scene hugged the person next to them and celebrated the New Year.

After the short countdown, people scattered to celebrate the New Year in their own way. Some people drank beers while gazing at the beach, and the others enjoyed their hookah in the small hammock by the food court. But there were also those who didn’t stop dancing even for the New Year. And, of course, amongst them was the staff of DJ Mag Asia. The Frisbee Stage showcased German label Giegling’s show for 8 hours straight, and blissfully intoxicated by the music of DJs Molly, Konstantin, Paguita Gordon, and more, we remained at the stage until the first sunrise of 2020. 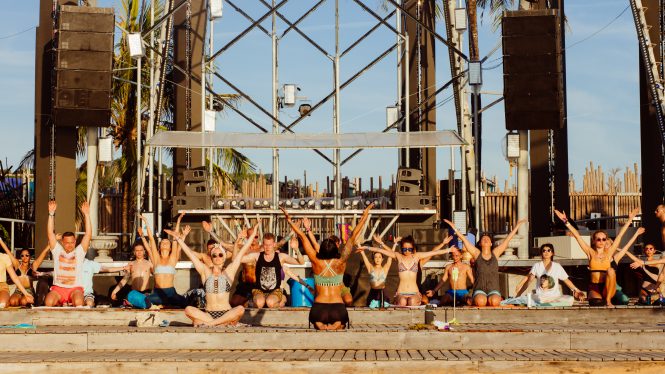 A Festival that Offers its Own Distinct Flavor

Marking its fourth anniversary this year, the Epizode festival has improved last year’s shortcomings and presented a new image of its brand. It has also joined the eco-friendly movement, which is one of the hot issues of the electronic dance music scene of today. For the entire duration of the event, Epizode cleaned up trash on the beach and banned the use of plastic inside the festival grounds. On top of that, it has also signed a sponsorship with beWater, a Vietnamese company that sells canned water, and have put together lectures on sustainability such as ‘Plastic or Planet’. The festival grounds of the environmentally conscious brand were completely free of trash, and the participants also willingly followed these guidelines.

Another unique element of the festival was Concept Market. An international art and fashion community based in Moscow, Concept Market is a marketplace for independent designers to showcase and sell off their goods and services including jewelry, clothing, tattoos, make-up, and more. The marketplace featured a wide range of rare products, and it was an interesting attraction for people who were already worn-out by hours of intense dancing. Not to mention that it was a great spot to take pictures for your social media, and we saw a lot of girls take selfies under the bright lighting.

Epizode also covered a variety of programs. There was a number of art-related workshop programs conducted every day at 2 pm, and a meditation program accompanied by soothing music was organized by the Indian meditation guru Punnu Singh Wasu. The Main Stage provided the participants some time to relax through a yoga class conducted by yoga masters Sara Ramalho and Hatha every day at 4.30 pm. From Tea Ceremony courses where you can learn and enjoy warm tea, to Body Art programs that allow people to paint their bodies in all sorts of colors while reflecting on themselves, the festival also provided additional entertainments for the participants.

Epizode was truly special in its own way. And it was especially so for Vietnam and its music scene. People from 96 countries flocked to Epizode this year, and the numbers show how much the festival has grown over the years. The festival’s success is even more meaningful as just a few years back, no one could imagine how a music festival of its size could thrive in Vietnam. Like how I made my New Year wishes while looking at the last sun of 2019 fade away, I wish that the soon-to-be international festival would provide a strong foundation for Vietnamese music as well as the growth for the local DJs and producers.