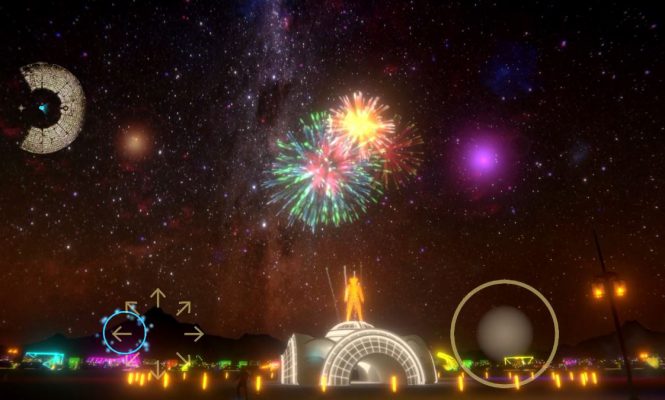 Burning Man 2020: Welcome to the multiverse, the largest virtual art and live music event in history.

The Multiverse has opened August 30 and runs through September 6.

Burning Man Project, the wider non-profit behind the annual festival is still happening this year. It’s just happening online, instead of its usual location in Black Rock City, Nevada.

Burning Man has gone virtual, but not by choice. The COVID-19 pandemic forced the cancellation of the in-person experience. But rather than going dark, organizers decided to lean into “The Multiverse” theme, which was named months before the pandemic was declared.

This new universe is thanks to the pioneering California company, Clipo Labs. CEO Faryar Ghazanfari said that he created the Multiverse when he learned that Burning Man was cancelled.  A burner himself, he was devastated and depressed when the news broke and wanted to utilize his company’s resources in the VR and IIR (Interactive Immersive Reality) space to allow the gates to still open.“We simulated a full-scale, virtual interactive Black Rock City including the deep Playa. Theme camps are designing their virtual communities and sound stages and will broadcast live events workshops and music. Artists are translating their incredible art into a 3D form that to be experienced in the playa. Burners will appear as 3D avatars communicating via live voice, in one unified experience, whether on a mobile phone or VR headset.

One of the many sound camps participating in this unifying experience is Playground, co-created and helmed by none other than Carl Cox.  Carl, as most know by now, is an avid burner, and works tirelessly with his band of sisters and brothers to make Playground a reality each year.

“So much work goes into the planning, music curation and execution of this camp that I was absolutely heart-broken when I learned we would not be able to come together this year.  We are a family, we depend on this time to reconnect, to release and to just be part of something bigger than ourselves.  When we learned about this opportunity to connect in our Playground space, as ourselves and with the ability to engage, react, and move as we would on the Playa, I was all in.  I cannot wait to be with everyone, share a dance, and just be free.” -Carl Cox

The Multiverse will include all the beautiful art of the Honoraria artists of 2020 and burners can roam freely through the seven miles of camps, deep playa and even participate in workshops.

This week-long event will bring the magnitude of VR technology to bear on what will certainly become a history-making experience, and a way to bring the world together like never before.  There is a small fee (about $1.14 per day) for those in the US, Canada, Australia, and Europe to attend the week-long event that helps defray the expense of running the servers where the Multiverse is being generated.  There is no cost for the rest of the world and there is an option to support the less-fortunate by donating the gift of a ticket.

Playground takes place inside the #DustyMultiverse along with camps like Mayan Warrior and Opulent Temple.

You can find more information here.  You can also check the timetable of Playground below. 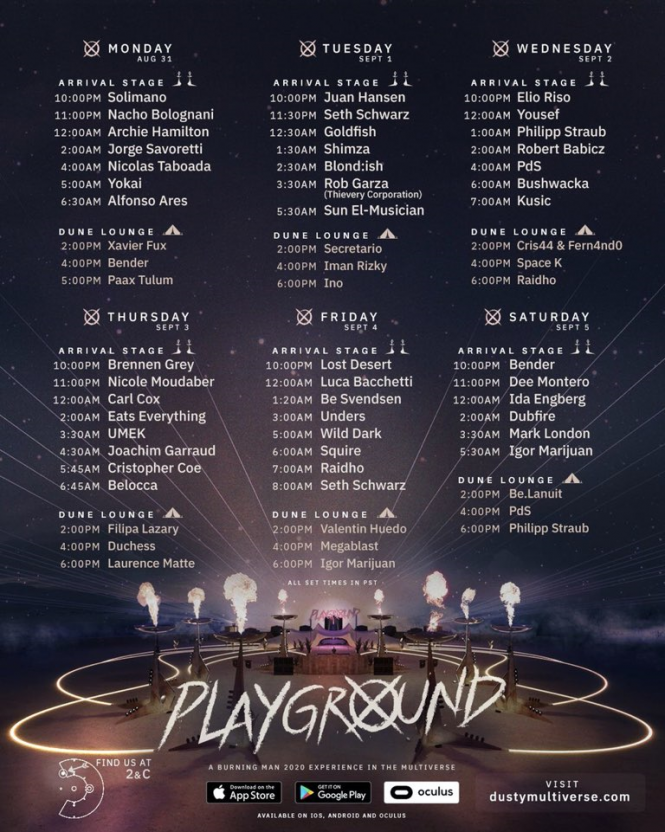