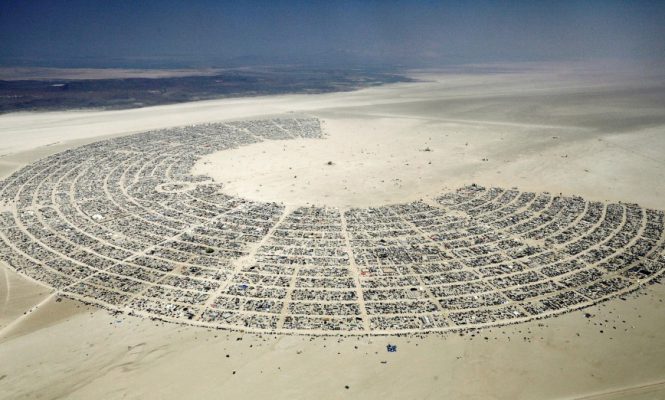 Hundreds have gathered at the Burning Man festival site despite the event’s cancellation.

After weeks of deliberation and uncertainty, which culminated in the postponement of the Burning Man annual gathering’s main ticket sale in July, the announcement was made on 10th April that Burning Man 2020 would not be going ahead due to ongoing concerns amid the coronavirus pandemic.

The festival was scheduled to take place from Sunday 30th August until Monday 7th September, and despite a virtual, immersive Burning Man Multiverse for fans to experience online, burners have been putting on their own Burning Man events across the states.

“Last night, over 1,000 people crowded on Ocean Beach to celebrate Burning Man,” Breed wrote in a Tweet. “This was absolutely reckless and selfish. You are not celebrating. You are putting people’s lives at risk. You are putting our progress at risk. No one is immune from spreading the virus.”

Closer to the festival site, hundreds Burning Man devotees drove out to Black Rock City in Nevada to throw their own festival, complete with their own scaled-down Man. Throughout a twelve mile stretch of desert, RVs, campers, and art-cars have been popping up since Sunday afternoon, MyNews4 reports.

No Burning Man this year? Think again. Burners still made the journey out to Black Rock City to have their own kind of burn this year. pic.twitter.com/sd17a52KAY

Last night, over 1,000 people crowded on Ocean Beach to celebrate Burning Man. This was absolutely reckless & selfish. You are not celebrating. You are putting people's lives at risk. You are putting our progress at risk. No one is immune from spreading the virus.

Following the launch of their virtual events platform Kindling, Burning Man has launched a fundraiser, after an “unprecedented revenue shortfall” amid the cancellation of the flagship Nevada event.

“Sadly we will not be gathering in the Black Rock Desert in 2020,” an accompanying statement on the crowdfunder reads. “Though this will result in an unprecedented revenue shortfall for Burning Man Project, we remain optimistic. We are committed to maintaining the critical infrastructure we’ll need, after cuts to expenses and staffing, to produce Black Rock City 2021 and continuing our vital off-playa work in the year ahead. We can’t do this without your help.”

“With your support, we will continue to offer opportunities to share your creativity and passions and, above all else, stay connected with others in these challenging times.”

Supporters can make a one-off donation to Burning Man Projedct, or set up a recurring payment, via the website here.