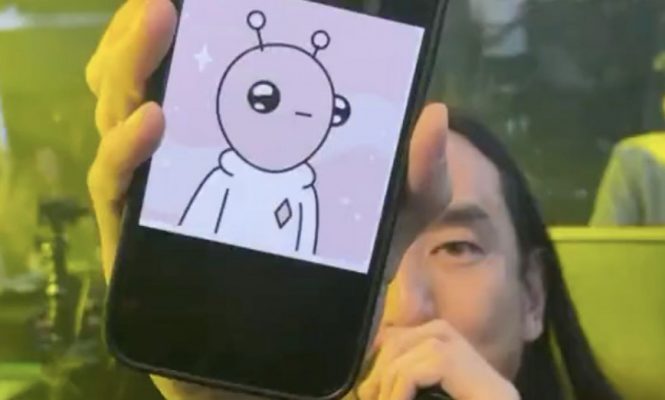 “Check this little gorgeous alien out. I had to stop the music because I’m so fucking excited.”

Steve Aoki interrupted one of his own sets to show the crowd his latest NFT purchase.

The self-proclaimed NFT fan stopped the music at a recent show to pull out a picture of a pink alien on his phone, which he purchased from the illustrator doodles. Aoki reportedly paid 269.69 ETH, the equivalent of $859,000 (£627,053) for the NFT.

In the video, which he posted on Twitter, he enthusiastically shows onlookers and says, “Check this little gorgeous alien out. I had to stop the music because I’m so fucking excited.” Alongside his Tweet he explained, “Nfts make me feel like a kid again.”

Reporting his purchase via Twitter on 7th January he wrote, “Just purchased the 9th rarest @doodles in existence! There are only 10 alien type doodles ever created and I own one of them now! Welcome #2238 to the family!”

Since then, the floor price for doodle’s lucrative collection has increased by more than 60%. His collection includes over 10,000 “doodles”, one of which is allegedly owned by Snoop Dogg.

Aoki has been devoted to the digital assets since their inception. He recently launched his own NFT marketplace, OddKey, in collaboration with comic book author Todd McFarlane. His previous collection, Dream Catcher, sold for $4.25m.

The American DJ is no stranger to quirky investments. In 2018 he launched his own pizza delivery company, Pizzaoki which followed the release of his novelty cake themed gifts the year before, including a cake shaped phone charger and a sock range delivered in a cake box.