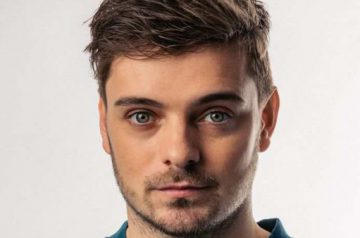 Style:
“Electronic/pop.”
Best known for:
“Hits such as ‘Animals’, ‘In The Name Of Love’ and ‘Scared To Be Lonely’. Released the official UEFA EURO 2020 Soundtrack, ‘We Are The People’, with Bono and The Edge.”
Tune of the year:
“Fred again.. ‘We Lost Dancing’.”
From: The Netherlands
Rising star DJ/producer of 2021: “GetGet.”
Since his first appearance in the Top 100 DJs poll, way back in 2013, Martin Garrix has been a mainstay of the list. 12 months later he was a top ten entry, and he’s been there ever since, walking away with the hallowed title of No.1 spinner in the world three years running, only slipping to second and third position in 2019 and 2020 respectively. This year he’s back up to No.2.
Suffice to say, plenty has changed about the dance music world in that time, and the fact he has remained on top of his game throughout is testament to both an enduring popularity and restless desire to keep pushing EDM and electronic sounds forward, into new directions. His AREA21 project with Detroit’s Maejor is a case in point, combining high concept narrative — aliens crash landing on Earth, which they find confusingly divided — with guitar pop sensibilities. “The music is very different from the Garrix stuff,” Martin tells DJ Mag. “I play guitar, I’m singing background vocals and Maejor is rapping, singing and co-writing everything.” A debut full-length drops imminently, and expectations are sky high.
On the solo front, since we were last here Garrix has delivered a succession of huge singles to widespread acclaim, winning over even more fans across the globe in the process. Crucially, these provided more evidence to support the theory that this Dutch DJ and producer remains one of the broadest in his sound, hence drafting a slew of guests from across a broad musical palette. Namely U2’s Bono and The Edge (‘We Are The People’), Swedish dark pop superstar Tove Love (‘Pressure’), US rapper G-Eazy with indie vocalist Sasha Alex Sloan (‘Love Runs Out’), and Apeldoorn producer Julian Jordan, who joined with UK bass don Tinie Tempah for the stadium-filling energy rush of ‘Diamonds’.
Elsewhere, Garrix’s STMPD RCRDS label continues to provide a platform for even more artists, with its Netherlands studio complex now regarded as the country’s most technologically advanced. It’s an ideal destination for up-and-coming talent to ensure their work will turn heads, while established producers are also regular guests. All of which is before we’ve even had chance to mention a calendar of bookings which, since lockdowns began easing, has included headline slots at some of the planet’s biggest dance music festivals, from EDC in Las Vegas to Romania’s Untold.
“It has been such a different year that has definitely shown health always comes first. It has also really made me appreciate the things I took for granted in life even more. Free hugs for everybody,” Garrix tells DJ Mag, before explaining how he thinks the collective experience might shape the future of our industry and scene. “I think some people in the industry might strive to get a better work-life balance after being able to spend so much time at home the past year. But other than that, I really hope we will get back to our old ways and pick up the big festivals and shows all over the world again soon. Music brings us together and I feel that is much-needed after the past two years.”
How was your first gig back after lockdown?
“It was absolutely insane. I hadn’t played a show in almost two years, so was super nervous to get back on the stage. Being able to feel the energy from the crowd again after such a long time was unreal.”
How has the last 18 months changed how you view your work/life balance?
“It has definitely given me some time and space to unwind, and have my first actual holiday in many years. I had a lot of time with friends and family and was able to spend way more hours in the studio than usual, which has helped me creatively. I love touring and being able to play so many shows, but hitting the pause button hasn’t been too bad for me.”
What’s the best bit of tech you’ve added to your studio or DJ setup this year?
“I switched to Pro Tools to record vocals and guitars, which has been an amazing change in my workflow.”
What’s the best album you’ve heard this year?
“Fred again.. ‘Actual Life’.”