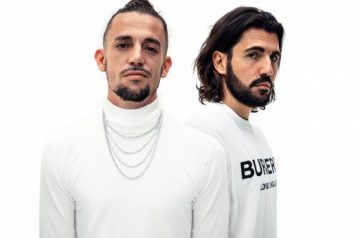 DOWN 3
Style:
“It still and always will be about the crowd.”
Best known for:
“Smashin’ the house!”
Tune of the year:
“Suark ‘Take It Slow’.”
From: Belgium
Rising star DJ/producer of 2021: “Azteck.”

Dimitri Vegas & Like Mike’s Top 100 story is well-known by now, rapidly rising up the ranks after their debut entry in 2011 to top the poll in both 2015 and 2019. World events might have stopped their dynamic DJ show for a while, but a decade down the line from cracking the upper echelons of EDM, the Thivaios brothers are still proving they’re adaptable to whatever challenges life throws their way, adopting new technologies and partnerships to keep their brand in the ascendancy.

After racking up 50 million views in just 24 hours on TikTok last year, thanks to their track ‘Do It!’, they began 2021 as Belgium’s most streamed artists, recording 520m plays on Spotify. Small wonder then that the big brands came knocking: they formed a partnership with McDonald’s, releasing the single ‘Feel Your Love’ and DJing through the fast-food giant’s app; worked with Coca-Cola curating tracks; and even became ambassadors for the World Wildlife Fund, talking about issues such as the use of plastic.
They continued to explore the virtual spaces opening as computing evolves. Signed up to Prizm, a virtual reality world released within Sensorium Galaxy, they’re set to perform alongside other world-famous names, including Carl Cox, Armin van Buuren, David Guetta and Charlotte de Witte. The duo also appeared as characters in Free Fire, the most downloaded mobile game in 2019, and wrote the theme to its new campaign, ‘Rampage New Dawn’.
Given 2021’s unprecedented time and space, it also welcomed a move into solo projects, a process of individuation that highlighted their contrasting tastes. Dimitri’s debut single ‘Pull Me Closer’ explored a poppier vein of house. After bagging a role in the film Jurassic World: Dominion, he’s also been filming his first leading role in Hazard, a film by Belgian director Jonas Govaerts. To top it off he’s launching a graphic novel, Alien Samurai Dino Warrior, which comes accompanied by the year’s biggest buzz, unique NFTs.
For his part, Like Mike explored his love and rap and trap on his debut album ‘Pain, Love, & What Comes After’, a string of singles, including the recent ‘Silence’ featuring Lil Baby, and ‘W Hotel’ with Smokepurpp and Blueface.
Both dropped clothing ranges: Dimitri a Mortal Kombat capsule collection, Mike his Green Room Capsule Collection, available in London’s Selfridges.
If that already sounds like a heavy workload, they still found time for a hectic release schedule of high-profile collabs. ‘Reunion’ had them team up with ALOK and KSHMR for another Free Fire theme track, they linked with German hard dance heroes Scooter for ‘I Love Hardcore’, got jiggy with Bassjackers on ‘Drop That Beat’ and even had time to write a Christmas track, ‘Christmas Time’, as part of festive mix ‘Home Alone’, released via their own Smash The House label.
Accompanied by the ultimate highs and lows of life, the death of their father and the birth of Dimitri’s son, London Takis Thivaios, the Dimitri Vegas & Like Mike juggernaut shows no sign of slowing.
How was your first gig back after lockdown?
“It was a great feeling getting back to business again with our headline slot on the magical Island Pāpiliōnem for the Tomorrowland virtual festival. We’re looking forward to doing it for real and in person next time in summer 2022.”
How have the last 18 months changed how you view your work/life balance?
“The time off the road gave us a lot of opportunities to spend more quality time with family, which has been amazing. In many ways, it was like a reset for what we want to achieve with our careers. The time away also proved to us how much we miss the shows, how much we miss the fans and the buzz of the scene.”
What further steps should the industry take to combat climate change?
“Ending fossil fuels is the only way to combat climate change. Whatever can be done within our scene to transfer to renewable energy is going to help this urgent quest to combat climate change. Also, the complete removal of plastic waste in the festival scene should be top of the list.”
What’s the best bit of tech you’ve added to your studio or DJ setup this year?
“We actually just focused more time on the gear we already have. The newest bit of kit we’ve added recently would be Pioneer DJ’s CDJ-3000.”
What’s the best album you’ve heard this year?
“‘Donda’ by Kayne West, and if you haven’t heard Mike’s debut album yet, you really need to listen to ‘Pain, Love & What Comes After’.”