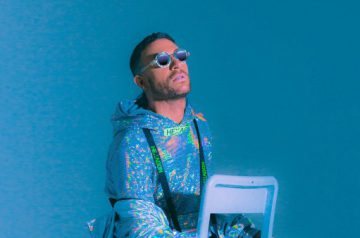 From: Amsterdam, The Netherlands

The force was definitely with Don Diablo in 2021. Pre-pandemic, the Dutch DJ was averaging 200 performances a year, selling out venues in Asia, across Europe and the US. But the worldwide pause, which put a halt on things for most of his contemporaries, allowed the DJ to re-examine his career and come back stronger, adding a few more strings to his artistic bow. In January, Diablo released ‘Into The Unknown’, an unusually dark and downbeat track for someone known for bouncy euphoric numbers. He also concluded the first season of his sci-fi comic book ‘Hexagon’ in March after a 20-week run.

In that same month, he announced the sale of his first NFT, GΞNΞSIS, which sold for a whopping $200,000 and in April made history with the sale of ‘Destination Hexagonia’, the world’s first NFT full-length concert. Diablo had teamed up with videographer Paul Snijdea for the sixty-minute show, which was bought for a staggering $1.2 million and delivered to the owner by way of USB. The proceeds from the sale went to the DJ’s newly-created HEXAGON Foundation, set up to help artists navigate the NFT space. Things didn’t stop there — his third digital art piece, INFINITΞ FUTURΞ, sold for $927,500 at the world-famous Sotheby’s online auction in June and word on the street is he’s hatching plans for a high-tech, spaceship-inspired NFT rumoured to cost the same price as building a house.

September saw the release of Diablo’s third album ‘Forever’, a dreamy and emotive production featuring pop heavyweights Gucci Mane, Emeli Sandé and Ty Dolla $ign. The record rounded out at 21 tracks and was packed with plaintive melody, warm synth and nu-disco rhythms. The Hexagon label-head crafted the record as a series of mini-scenes that together formed a film, detailing themes ranging from familial relationships and loss to loneliness and legacy.

The future house DJ also unveiled a co-branded collaboration with the Lucasfilm franchise that same month, releasing a limited edition of Star Wars-themed outfits. Some 100 jackets and matching trousers were put up for sale on the StockX site and sent to die-hard fans in a custom-made box, which included a one-of-a-kind QR code giving access to the virtual collection.

If that wasn’t enough, Diablo will also make his debut as musical director in November with Forever Young, an interactive theatre show. The play, which will have its first run at a secret location in Amsterdam, was written by Mabel Nummerdor and Sjoerd van Schooten and deals with fame, alienation and mental health, topics close to Diablo’s heart. The artist has truly come into himself in the post-pandemic world. Speaking to We Rave You in September, he said: “I think everything happens for a reason and I’m a strong believer of that and the pandemic really allowed me to reinvent myself, reinvent myself physically, mentally, but also musically and creatively.”

Whether he’s releasing records, creating art for the digital space, or dreaming up stories for comic-book fans, there’s no doubt that the wind — or the force — is definitely in Diablo’s sails.

“High energy and quite emotional.”

“It has shown me there is much more to life than working and travelling the world non-stop. It has also opened other creative doors for me, mainly in the digital art space.”

“I have launched a new initiative alongside the United Nations called StreamTo Regreen. The first single to kick off the global campaign was a collaboration with Ty Dolla $ign. All proceeds of the single go directly to JustDiggit, who make sure one square metre of land gets regreened for every 25 streams. Thus far we have regreened over 300,000 square metres and counting.”

“Bleachers ‘Take The Sadness Out Of Saturday Night.”