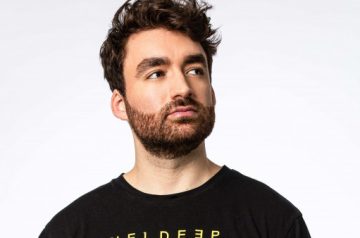 Style:
“Mixing future house and dance with tech/deep/bass house, techno, electro, progressive, disco and more. Bridging the mainstream and underground.”
Best known for:
“Pioneering the future house genre since 2014, my weekly Heldeep radio show, running Heldeep Records, my darker alias HI-LO, and my eclectic/versatile sets.”
Tune of the year:
“This mash-up I made for my sets of Christian Smith – ‘Stratosphere (Ronnie Spiteri Remix)’ vs Shouse ‘Love Tonight’ – has been crushing it for me.”

Though live performances have only just become possible again in many countries, Oliver Heldens had a busy summer and early autumn of gigs. He toured the US, played at SAGA festival in Romania and at Creamfields in the UK, before a triumphant headline show at London’s massive Printworks.

“In the US I was blown away by the energy of the crowds,” Heldens says. “Same goes for the few festivals I’ve played in Europe recently and my own headline show at the legendary Printworks, it just feels really good to be playing shows again!”

He also spent lots of time in the studio during the last 18 months, developing the sound of his more techno and progressive-driven HI-LO alias. Released this year, ’Balearic Mornings’ with Reinier Zonneveld was a euphoric pumper built for (hopefully) 2022’s Ibiza season, while ‘Saw Of Olympus’ (another Zonneveld collaboration) was an acid-propelled chugger with strident kicks and hats.
“I’ve found myself doing more progressive or even trance-influenced stuff than before,” Heldens says. “Also one of my upcoming HI-LO tracks, ‘Hera’, on my Drumcode debut EP, is quite proggy and euphoric. It’s a real crossover techno anthem.”

Heldens, though, has always drawn from various different dance genres, and in 2021 he reached for the rave lasers too, tapping into the pervasive ’90s revival that is sweeping all areas of the scene. ‘Ma Luv’ with MorganJ was all diva vocals and big synth stabs. “True,” he says, “that kind of music has definitely been an inspiration for me recently, you can also hear that in my track ‘Rave Machine’ featuring Rowetta, but I’m influenced by a lot of different styles and sounds.”

Heldens is still working on a track with a specially recorded guitar line from Chic’s Nile Rodgers, channelling the disco sound, another musical passion. “He laid down some of his signature funky guitars, but I just couldn’t find the right vocal for it,” Heldens admits. “I must’ve written at least 12 toplines with several songwriters, but I now finally found the right vocal sample for it and I’m having a choir re-sing that vocal now. I really can’t wait to release that one!”

This year, Heldens also got the chance to remix one of his all-time favourite tunes: Roger Sanchez’s evergreen ‘Another Chance’, dialling up its epic sensibilities and adding a trance tinge.
“‘Another Chance’ is one of my favourite dance music records, so it was a huge honour to work on this remix for the 20-year anniversary,” he says. “I feel very grateful to be able to work on such awesome projects, same as when I got asked to remix Chic’s ‘Le Freak’ for its 40-year anniversary. I’m really happy how these turned out.”

As the night-time industry begins to open up again, Heldens is looking ahead to a brighter future. “I truly want to thank everyone who has supported me in my career so far,” he says. “It’s been an insane journey already, but at the same time there’s so much more musical territory to explore, so I’m super excited for what the future holds. Bring it on!”

“It was early July this year under my darker alias HI-LO at a Filth On Acid party here in the Netherlands, and it was amazing! It felt really good to be on stage again and I came well-prepared with lots of new tracks that I made during the pandemic, which made it extra fun.”