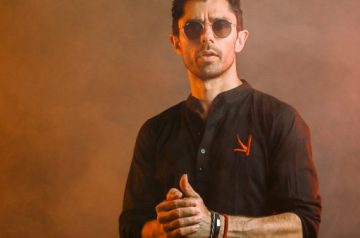 UP 1
Style:
“Global EDM.”
Best known for:
“‘Power’, ‘Wildcard’, ‘Secrets’, ‘Carry Me Home’, ‘Harmonica Andromeda’.”
Tune of the year:
“Cristobal Tapia De Veer ‘Aloha!’ from The White Lotus OST.”
From: Berkeley, California
Rising star DJ/producer of 2021: “Padé.”
2021 for KSHMR was all about unveiling his debut album, ‘Harmonica Andromeda’. “I really wanted to show people the music I had inside of me that wasn’t really seen before,” he says. “It spans many moods and genres, which was a challenge but it made me fall in love with music all over again.”
The American musician, producer and songwriter also worked on creating new tools for producers including a new plug-in debuting later this year, as well as ‘Sounds Of KSHMR Vol. 4’, the latest instalment of his sample pack series.
He also valued the pandemic-induced downtime and used it as a chance to “develop new hobbies and relax”. Fans will notice the dance titan managed to evolve his sound this year, too: he broke away from big room and tried to focus on music that “embodied the breadth of my musical interests”.
He will continue to hone this new sound on further singles in 2022, and promises a second album will quickly follow his first.
How was your first gig back after lockdown?
“Truly incredible, seeing the crowd reminded me why I make music.”
How have the last 18 months changed how you view your work/life balance?
“I put a lot more emphasis on things outside of work – time with friends, going to the park with my dogs.”
What further steps should the industry take to combat climate change?
“I’m really not an expert but I suppose festivals could aim to use solar energy.”
What’s the best bit of tech you’ve added to your studio or DJ setup this year?
“I got the super-fast Thunderblade drive. It stores all my Kontakt libraries and helps with video editing, which I got into this past year. I actually worked on the VFX for my music videos ‘Around The World’ and ‘The World We Left Behind’.”
What’s the best album you’ve heard this year?
“‘Harmonica Andromeda’ by this guy named KSHMR was pretty good.”