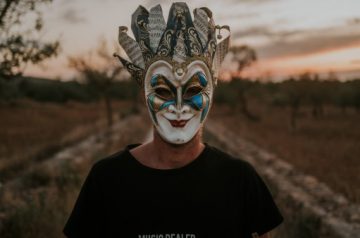 UP 18
Style:
“High-tech minimal.”
Best known for:
“My joker mask and my own music.”
Tune of the year:
“Of course, one of mine: ‘House Music feat. Artic Lake’.”.
From: Germany
Rising star DJ/producer of 2021: “Moritz Hofbauer.”
In the summer of 2019, Boris Brejcha played his first shows on the White Isle, at Ushuaïa and Hï Ibiza; his trademark, Carnival-inspired mask and self-styled “hi-tech minimal” sound framed the German as a unique prospect for Ibiza’s packed calendar. Later that year, he entered the Top 100 DJs poll for the first time at No.85; in the 2020 edition, he climbed 25 places to No.60, and this year he’s up a further 18 places.
Throughout the pandemic, Brejcha has released music by Deniz Bul, Theydream and Ann Clue (among others) on his FCKING SERIOUS label, and plenty of original music, too. Alongside several singles and EPs, his debut album, ‘Space Diver’, was released on Ultra Music last year. As clubland gradually returns for millions worldwide, Brejcha is charting his own path back to the dancefloor, with shows in London, Prague and Berlin this winter. And with his hi-tech minimal – that twisted blend of minimal techno, melodic house and rough electro – Brejcha is set to charm old and new fans alike.
How was your first gig back after lockdown?
“It was a bit like going back in time to 2019 and you couldn’t believe that you were back at a party with so many people. You had been waiting for this moment for so long, and then it quickly felt like you had never been away.”
How have the last 18 months changed how you view your work/life balance?
“I have realised how nice it is to spend ‘normal’ time at home and now I put even more emphasis on my health. I also have to say: I enjoyed this time in a way. I’ve rarely been home so much at a stretch — that was very nice.”
What’s the best bit of tech you’ve added to your studio or DJ setup this year?
“Since I only use software in the studio, I have everything digital. But I bought a couple of plug-ins from the company UJAM.”
What’s the best album you’ve heard this year?
“I honestly don’t listen to much music other than my own and my label mates, so I guess I’ll have to pass.”