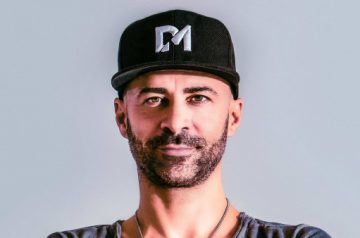 UP 4
Style:
“Groovy and energetic music.”
Best known for:
“Being the people’s DJ and a provider of magical nights.”
Tune of the year:
“Shouse ‘All I Need Is Your Love Tonight’.”

Influential Portuguese producer and DJ Diego Miranda has been DJing since he was only 14 years old, beginning his career playing in the clubs and festivals of his home country. His recording career kicked off in 2005 with the John-E collaboration ‘When You Come’ and since joining the international DJ circuit he can now often be found dropping his high-energy vibe at venues like Ushuaïa Beach Hotel, Hï Ibiza and Green Valley.

Production-wise, 2021 has been good for Miranda, who specialises in chunky electro-house bangers and accessible bigroom vocal tracks like his jittery ‘Energy’ with Jenil featuring Godroy Music, which dropped in the summer. His festival-smashing vocal track ‘With U’ with Emre Cizmeci and Mia Martina on Dimitri Vegas & Like Mike’s Smash The House label was a biggie for Miranda this year too, picking up over a million YouTube views in just a few weeks. Smash The House also put out his two collaborations with Zov, ’Party At The Club’ and ‘Room 69’ and in a productive year Miranda also dropped his belting high-octane ‘More Power’ collab with Vini Vici featuring WUANT.

“It felt like the first step in a new uncertain world but it was absolutely amazing! I played at Privé Dubai and the energy was pumping.”

“There was more time to plan and prepare my schedule, look into playlists, and focus on the production side of music. It did feel more balanced in terms of work/life but I wouldn’t trade it for live DJing. Being close to the crowd is everything!”

“Further initiatives to offset carbon footprints and events that can raise funds to help implement sustainable practices worldwide may be a way for the industry to reduce its impact and address climate change issues.”