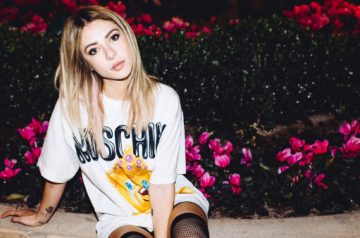 DOWN 2
Style:
“Open format, leaning toward bass.”
Best known for:
“Fucking people up on a spiritual level.”
From: Sydney, Australia
Rising star DJ/producer of 2021: “Moore Kismet.”
It’s been a busy twelve months for Alison Wonderland. After a run of singles in 2020, the Australian producer jumped on a collab with Valentino Khan for the deep house-cum-electro pop track ‘Anything’. Released on the Mad Decent imprint in November, the record married Wonderland’s angelic and angst-ridden vocals with Khan’s heady rhythms. “This year I’ve been writing lots of music and working on myself,” she tells us.
In February, she teamed up with virtual entertainment company Wave for Wonderverse, a ground-breaking virtual concert, where fans found themselves fully immersed in a world of forests and ghosts, socialising with one another in real-time, including with Wonderland’s very own avatar. The DJ also returned to the iconic Red Rocks Amphitheater in September, putting on two sell-out shows for the party faithful. The second edition of Temple of Wonderland, which appeared at the Colorado venue two years prior, was nothing short of spell-binding. With a trippy backdrop, which at times resembled the mosaic of a Catholic church, Wonderland managed to weave a solo cello performance, two worldwide premieres and a choir and live band into the mix.
How was your first gig back after lockdown?
“It was at Lollapalooza 2021 – great!”
How have the last 18 months changed how you view your work/life balance?
“I have definitely started to value home time as much as touring time. I think it’s important to be able to recuperate properly before and after touring.”
What’s the best bit of tech you’ve added to your studio or DJ setup this year?
“A bed for my dog next to me while I make music.”