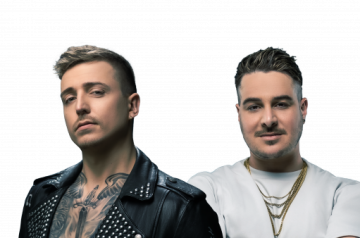 Almost from the off, Blasterjaxx have occupied a treasured space in the upper echelons of the Nethelands’ evergreen EDM scene. With their signature brand of hi-def bigroom house, the duo has spent a decade blowing the roof from arenas and sending festival crowds into mosh-pit pandemonium, and become mainstays on the Top 100 DJs poll in the process.

With more than 20 releases and remixes to their name in 2021 alone, it’s clear the only way Thom Jongkind and Idir Makhlaf knew how to deal with the enforced break to touring was to get busy in the studio, and it’s no surprise they’ve been getting the shows under their belts since then. Having overseen the release of more than double that many releases on their Maxximize imprint, a subsidiary of legendary Netherlands label Spinnin’, you would be forgiven for finding it hard to believe that the last year has seen them develop a more balanced relationship with work.

Either way, the steady stream of quintessential Blasterjaxx bangers has been a godsend for big-room fans.

Thom: “Absolutely amazing! Even though I was a little bit nervous, it all felt ‘normal’ again after five minutes on stage.”

“We both found our balance back, which was long gone. Both work and our private lives are now way more efficient, we have more drive, more fun and we are full of positive energy.”

“Even though it was released back in 2020, we recently discovered the album ‘Andro’ by Tommy Lee. It’s amazing!”