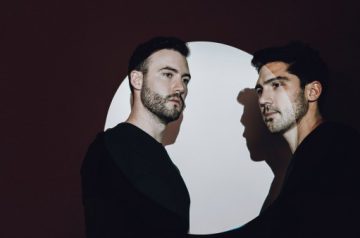 UP 2
Style:
“House/tech-house.”
Best known for:
“House music icons in Latin America.”
Tune of the year:
“Melé ‘Groove La Afrika’.”
From: Mexico City
Rising star DJ/producer of 2021: “John Summit.”
Having burst into the Top 100 list just two years ago, Tom & Collins have managed to up the ante even in the face of a global pandemic over the past year. Already some of Latin America’s most beloved DJs, Juan Pable Escudero and Jorge Corral of Mexico last year launched their very own record label, Terms and Conditions, and in 2021 alone the label has put out a staggering amount of music (almost 50 releases and counting), including the increasingly vital series of compilations called ‘Hidden Jams’, featuring some of the finest up-and-coming talent from the Latin American tech-house scene.
On the road, the duo has been busy making up for the time lost over lockdown, splitting their time equally on either side of the Mexican/US border and visiting South American countries as they too open up after the big pause. Expect them to close out the year with the same enthusiastic gusto at their shows and another slew of impeccable party bangers from the label.
How was your first gig back after lockdown?
“It was a very unique feeling. We were a bit rusty and hadn’t tried out tracks in a long time. In the end, it was a great gig.”
How have the last 18 months changed how you view your work/life balance?
“It has definitely made us more aware of what we do, the amount of time we dedicate to each thing, and the impact of positive habits such as working out and meditation.”
What further steps should the industry take to combat climate change?
“If we spread awareness on the subject people can get involved locally, join organisations, and back up politicians that have climate change as a priority.”
What’s the best bit of tech you’ve added to your studio or DJ setup this year?
“Pioneer DJM-V10 mixer. The performance is crazy. So many new features on the effects.”
What’s the best album you’ve heard this year?
“‘Actual Life’ by Fred again.. Super emotional but still fun album that felt super fresh.”