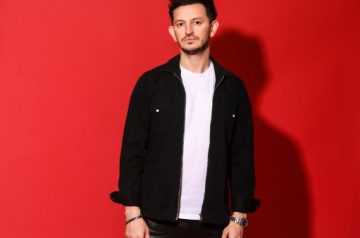 Placing in the Top 100 for the second year running, Turkish-Dutch DJ and producer Burak Yeter continues to thrive, despite the uncertain conditions of the last twelve months. Seen performing last summer live with a 100-strong orchestra, he’s continued to tour the world — but this time in virtual form. Streaming his Connection Radio show live from 20 impressively exotic locales, it raised the bar for radio everywhere, Burak often whipping out his guitar to play along to his DJ performance. Backdropped by footage of sweeping scenery, the logistics required a crew of sixty people to bring to fruition.

He’ll need these organisational skills for his World Symphonic Tour, which restarts again this year. If that sounds like a lot of plane tickets, he’s partnered with Sun Express airlines. A Turkish-German company based in Antalya, their support acknowledges Yeter’s help in promoting the area, even performing at Fraport Tav Antalya Airport. In return, it’ll no doubt come in handy when he has a brass, wind and percussion section to fly.

“I played in a gig in Hungary, my first for one-and-a-half years. It was a stadium event and it was huge. As the world turns, the music continues playing.”

“The live events got cancelled, but then I started the virtual concerts in Tokyo, Budapest, Amsterdam, Antalya, Dubai, Banja Luka etc. I had more time for productions, so I produced remixes, new songs and arrangements. I had an Instagram live with Alica Keys and we started a new song.”

“I have shown some examples to the world during the lockdown with my virtual concerts. Last month, I had a virtual concert at Termessos Theatre where King Zeus lived.”

“Coldplay’s ‘Music Of The Spheres’.”