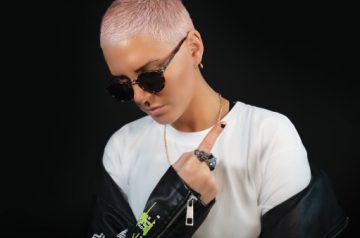 Christina Novelli’s music manifests itself in many guises: her vocals, DJing, songwriting and production. Darting through trance, EDM, big room and back again, it’s probably this holistic approach that makes her work so emotionally multi-textured; live performances oozing with an extra layer of excitement as her voice holds as much magnitude as her hardware skills.

But for the past year, the English artist’s shows have been few and far between. Embracing the imposed time off, Novelli has been enjoying life at a slower pace, indulging in writing and making a new album. Due for release early next year, it will follow a catalogue of releases that boast several stellar collaborations — including the catchy 2019 anthem, ‘Symphony Of Stars’ with Markus Schulz, and A State Of Trance’s 2018 Tune Of The Year, ‘The Air I Breathe’ with Richard Durand.

More recently, she’s teamed up with fellow trance star Talla 2XLC to release a new 2021 showstopper, ​​‘I’ve Been Gone So Long’, and is about to embark on a US tour.

“Incredible, because it had been so long it felt like one of my first ever shows. I took performing regularly for granted and when it all just stopped it was heart-breaking.”
How have the last 18 months changed how you view your work/life balance?

“They reminded me that it is super important to just slow down, take it all in and enjoy every moment of it. I was able to work on some other projects and finally be able to launch my record label, Muse Music Records.”
What further steps should the industry take to combat climate change?

“We can all definitely start by minimising our carbon footprint and re-assessing how we plan live shows and tours. The whole world should be doing a hell of a lot more to combat climate change, before it’s too late.”
What’s the best bit of tech you’ve added to your studio or DJ setup this year?

“I got myself a Roland SPD-SX pad that I’ve been playing around with in my sets. I have just redone my whole studio, and my new sE Gemini II microphone is an absolute game-changer.”
What’s the best album you’ve heard this year?