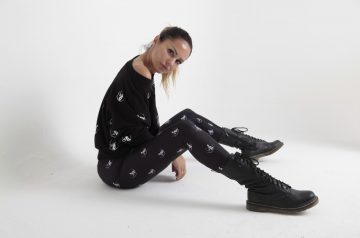 NEW ENTRY
Style:
“Full of contamination, but mostly techno. My kind of techno.”
Best known for:
“You tell me!”
Tune of the year:
“FBK ‘Headless (Len Faki Hardspace Mix)’.”

Introduced by Pete Tong as ‘The Techno Queen of Naples’ when she made her BBC Radio 1 Essential Mix debut in 2019, Italy’s Deborah de Luca now makes another debut — this time in the Top 100 DJs poll. Though it’s no surprise; Pete Tong is far from her only fan. Deborah has legions of them, who can be seen profusing their everlasting praise under anything she posts on social media.

Though she’s plenty more than a social media darling: until COVID stopped touring in its tracks, Deborah’s eye-watering schedule took her from Lebanon to London to Valencia to Paris to Bucharest and Croatia in a matter of weeks. She could be spotted at Resistance Miami, Ostend Beach, Brunch in the Park, Verknipt ADE or Eden Ibiza, where she held a residency in 2019 alongside Tronic boss Christian Smith.

But de Luca — who was born and raised in Scampia, the housing estate made famous through the Italian crime film and TV series Gomorrah — hasn’t slowed down since locking down, releasing her second album, ‘She Sleeps’, this August, to rave reviews. With a work ethic like this, and a spirit all her own, it’s no wonder she’s found so many fanatics.

What three things have most helped you through Coronavirus Lockdown?

“My dog, my studio and my home in Naples. I spent a long time in the studio at home during the lockdown. It’s where I finished my second album ‘She Sleeps’, which was released back in August.”

What lessons should the industry learn from this crisis?

“That everything can end in a second, without any preparation. Now I see my future differently. I make different choices, and my relationship with money has changed too.”

What steps need to be taken to address the racism in the dance music scene?

“I actually believe that in the dance music scene there is not much racism. I find much more sexism!”

What industry changes are you personally pushing for to make the dance music scene more inclusive?

“I personally do not follow fashions — the music I make is the fruit of my imagination. It is from my bag of life experiences and from what I like — that excites me.”

What’s the greatest dance music track of all time?

“That’s an impossible question. I can only say that if at the end of the set you play ‘Domino’ by Oxia, wherever you are, people get excited.”